Plant a tree in memory of Violet E. "Vi" Hess
An environmentally-friendly option 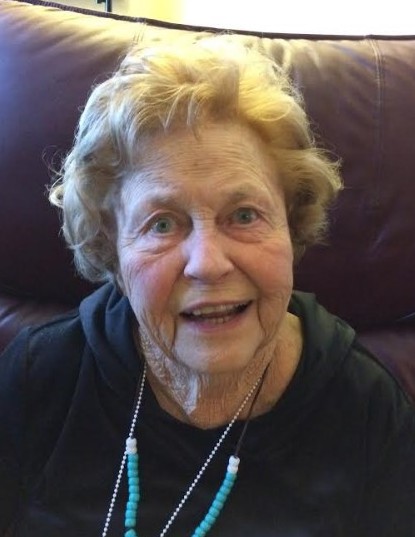 Vi was born December 7, 1930 to Clifford and Esther Sullivan in Riverside, CA. Soon after, the family moved back to AZ. Upon graduating from Phoenix Union High School in 1948, Vi married Elmer D. Hess.

While in her early years of marriage, Vi was actively involved with the Fire Bells, an organization through the Phoenix Fire Department that helped families who had lost their homes to fires.
In 1956, they adopted twin boys David and Donald and in 1958 adopted their daughter Laura. While Vi had 3 young children to raise, she dedicated her life to being a wonderful supportive mother.

In 1973, Vi attended Glendale Community College then went on to Arizona State University to earn her teaching degree. After graduation, she worked as a Special Education Counselor in the Washington School District for many years. Vi had a passion for gardening, dancing, traveling with Elmer, and hosting parties for family and friends.

After 55 years of marriage, Elmer passed away in 2004. She is survived by her sons, David Hess (Karen) and Donald Hess (Kelly) and daughter Laura Teague (Martin) as well as grandchildren Christopher Hess, Brandon Hess, Stephanie Hess and Ryan Hess, and great-grandchildren Piper, Seth, Madyn, Hunter, Kira and Fallyn. Also surviving Vi in death are her siblings, Betty Stephens, Barbara Heyer, and Cliff Sullivan; as well as numerous nephews and nieces.

Due to COVID restrictions a memorial service will be held at a later date TBD. In lieu of flowers, donations may be made to - Thema Health Services (Hospice), American Heart Association or National Kidney Association.

Plant a tree in memory of Violet E. "Vi" Hess
An environmentally-friendly option

Plant a tree in memory of Violet E. "Vi" Hess

I have great memories of Aunt Vi sitting at the table on Fryer and trying to keep us kids in line.  Even when we coaxed Donald into driving his bike into the pool she was angry but never really lost her cool.  She was such a bright and lively aunt that we all enjoyed her company and her hospitality.  I sincerely wish all of her family the very best under these times and I want them to know that she meant an awful lot to her nephews and to my mother, Betty .  Thanks Aunt Vi for being Aunt Vi.
Jeff Stephens

Vi, I always looked to you for help as a child and Sue and I would come to you for advice with our kids as our family grew.. You and Elmer were always there for us., As the only college graduate in out family I was  always so proud of you. Everyone knew you two wherever you went! My whole family offers our condolences to your family and our highest hope is that you know true peace now.
You are forever in our heart,
Cliff & Sue Sullivan
Cathy Sullivan
Christy Agosta
Ken Sullivan
Keith & Heather Sullivan
Betty Stephens
Barbara Heyer

Rest peacefully and assuredly in the arms of our Lord Jesus Christ Vi. I will always remember you and Elmer fondly with the Model T. You raised wonderful children in all 3. David, we love you and know how hard you worked and devoted you were to your Mom’s care. I’m sure it meant so much to her. Don and Laura, our deepest condolences and love to you and your families. I’m glad you all have each other for support.
McTee Family💜

Thank you for being my Mom.  I learned so much from you; compassion, gratitude, kindness, a strong work ethic and family values.  I love you and will miss you every single day.  Knowing you are now at peace comforts me.
Love from your daughter Laura

You will never be forgotten Vi aka Grandma. Thank you for accepting us into your family. Love always, Charlie, Brianna, and Maria Reynolds <3
Charlie A Reynolds II

A Memorial Tree was ordered in memory of Violet E. "Vi" Hess by Charlie A Reynolds II.  Plant a Tree

Plant a tree in memory of Violet E. "Vi" Hess