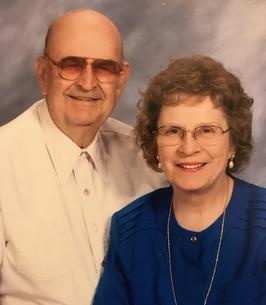 William Landon Winkler, 83, passed away December 28, 2018 at Banner Boswell Hospital in Sun City, AZ. He was born January 19, 1935 to Harry and Ada Patterson Winkler of Rozel, KS. Bill married Edith Mae Schultz in September 1958. They recently celebrated their 60th wedding anniversary at a reception with family and friends, and renewed their vows to Bill's surprise.

Bill grew up working on the family farm where his love for plaid shirts undoubtedly started. He graduated from Rozel High School in 1953 at the top of his class of 12. Following high school Bill served in the U.S. Army and made a lifelong friend of Bill Conaway while stationed at Fort Riley. Bill often remarked that his Army career consisted of digging holes and filling them back up at his Sargent's pleasure.

Bill worked in plumbing with his father-in-law, Vernon Schultz, for a short time before realizing that he did not like small crawl spaces and spider webs. He became a licensed mental health aide and worked at Larned State Hospital for 28 years before happily retiring.

Bill loved his family and was known for his sense of humor and quick wit. He was also passionate about Chevrolet cars. He enjoyed his time working on them, racing them and performing general maintenance on them. Bill was also an avid NASCAR fan and made several cross country trips to attend races. When Bill wasn't visiting his friends at Dwight Shank Auto, Reed Pharmacy, and the Welcome Inn, he could often be found "dragging the gut".
Bill is survived by his wife Edith Mae; their daughters, Cyndi (Brant) Carroll, Amherst, NH and Connie Winkler, Great Bend, KS; his sister Nada (Larry) Marshall, Fredericksburg, VA; three grandchildren, Blair and Quinn Carroll, and Landon Winkler; and two nephews, Brent (Lyn) and Alan (Wendy) Marshall.

A memorial service will be held at Beckwith Mortuary in Larned, KS in May.
To order memorial trees or send flowers to the family in memory of William Winkler, please visit our flower store.