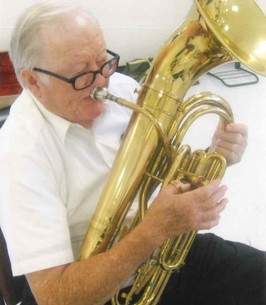 He was born in 1929 to Borghild and Truman H. Shoaff, Jr., the second of what would be four sons.
He was educated in Grand Rapids Public Schools, graduating from High School in 1947. He graduated from Itasca Jr. College in 1949, and in 1952 from the University of Minnesota with a degree in Chemical Engineering and Business Administration. He later received an MBA from the University of Chicago.
Vic started his career selling and delivering newspapers. During World War II, he worked on the Great Northern Railroad track gang, worked a summer on the "pit labor gang" at the Danube open pit iron mine, and at Blandin Paper Company where he worked part time for four years. These efforts financed his education.
He started his professional career as a Chemical Engineer in the Chemical Industry. This career was interrupted by service in the U.S. Army Chemical Corps. His career path evolved to the field of Process Measurement and Control and he joined the Foxboro Company where he served in Sales and Marketing roles for 30 years. This was followed by six years at Magnetrol International where he was Director of Sales and Marketing.
In 1954 he married Jeanette Presley of Bartow, Florida. They had one daughter, Marion Kay Deckman. Both preceded Vic in death. Vic is survived by brother William and his wife Paige of Sun City, AZ, and brother John of Charleston, S.C., and son-in-law Jeff Deckman of Van Nuys, CA, as well as several nieces and nephews.
Vic was a 66 year member of the International Society of Automation, a 50 year Mason, and a member of the Shrine. He was a life-long Episcopalian belonging to congregations wherever they lived.
In retirement, he shared his time between Mishawaka Shores on Pokegama Lake outside of Grand Rapids, MN, and Sun City, AZ. In both locations he enjoyed golf and playing the baritone horn in several concerts bands.

Graveside services will be held at Itasca Calvary Cemetery in Grand Rapids, MN.
To order memorial trees or send flowers to the family in memory of Victor Shoaff, please visit our flower store.