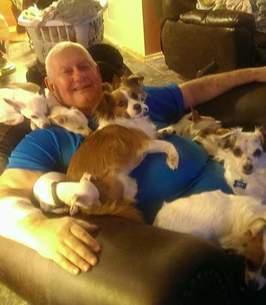 Ronald (Ronnie) K. McKee, passed away at his home in Waddell, Arizona on March 28th, 2019 after a long battle with dementia. He was born on March 26th, 1948 in Tarentum, Pennsylvania to Edward C. McKee Senior and Wanda M. (Blystone) McKee.

He graduated from Leechburg Area High School in 1966. He worked as a general manager in retail for most of his life. He moved from place to place with his wife and two daughters. He then transferred to Phoenix, Arizona in 1984. He enjoyed spending time with his family and his dogs, he loved going on his boat, and he was a huge Steelers fan.

He is preceded in death by his parents and his younger brother Edward (Eddie) C. McKee Junior.

No services per his request, but cremation services were provided by Regency Mortuary in Sun City, Arizona.
To order memorial trees or send flowers to the family in memory of Ronald McKee, please visit our flower store.