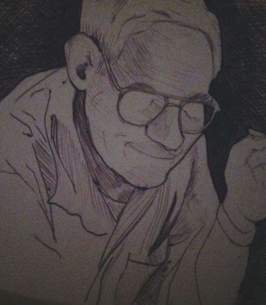 Fred Ray Voge was born in Zenda, KS on August 19, 1938 the second oldest son of Fred H and Mary Voge. Ray, as he was known to his family, spent 20 years serving in the United States Navy. Serving proudly with him was his wife, Burnett and children Carl and Prisicilla. During his service he circled the globe three times both under the sea and on. He retired with four gold stripes as a Chief Petty Officer. Shortly after retirement, they added a daughter Deborah and he built his second career as electrical engineer for Southern California Edison. He was an avid fisherman, veracious reader and life long learner. Ray had a passion for wood carving and built several violins for his family. He was a quiet man and easily earned the love and respect of family and friends. Ray is survived by his wife Burnett, son Carl (Jane), daughters Prisicilla and Deborah (Ken), four granddaughters Jessica (Alex), Justine, Stacey and Savannah and 3 great grand children Jackson, Rachel and Lincoln as well as his brothers Cord, Butch, Ron, Lyle, his sister Anna and several nieces and nephews.

To order memorial trees or send flowers to the family in memory of "Ray", please visit our flower store.