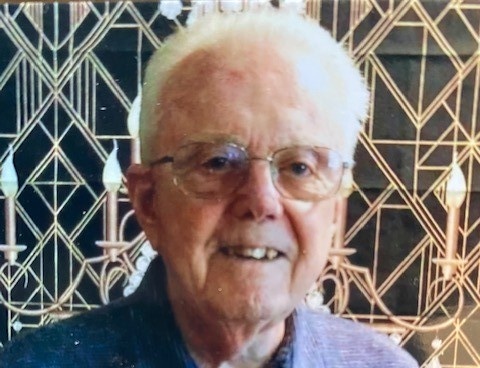 He was preceded in death by his wife of 60 years, Kathryn (Kay) and is survived by daughter Diane (Lynn) Ricke and grandson Patrick Murrish.  He leaves a legacy of love and memories to cherish!

Phil grew up in Chicago, IL before enlisting in the Army during the Korean War, where he served as an MP.  After finishing his time as a guard at Leavenworth Prison, he returned to Chicago where he made his home and began a life-long career at Illinois Bell Telephone Co.

He married Kathryn (Kay) Malone and together they raised their only daughter Diane. Though they were a small unit, they lived on beloved Maplewood Ave, among Kay’s extended Italian family, where many wonderful gatherings took place.  As a forever CUBS fan, he enjoyed kicking back with the family, watching the games on the outdoor TV with beer a hand!

After retiring at the age of 57, Phil and Kay moved to Central Florida, where he continued his love of golf! An avid walker, always preferring to walk the course than to ride the cart!

After 25 years, wanting to be closer to Grandson Patrick, they moved out west. Becoming residents of The Gardens of Ocotillo Senior Living, in Chandler, AZ.  Losing his wife shortly thereafter, Phil embraced the community and made many friends of the residents and staff.  He could always be found at morning exercise, bingo and virtual bowling, where he was a Pro!  Never missed a Happy Hour with his friends!  Above all he loved his walks!  Whether walking to a nearby park to watch the ducks and golfers, or strolling the halls at his residence, his feet always kept moving!  Being out in his community, afforded him to share the gift he had to make everyone smile and laugh!  Greeting all with, “It’s another beautiful day in Arizona, not a cloud in the sky!  Having a good day?”  Always full of gratitude he didn’t let a day go by without showing appreciation to the staff at the community, telling them they were doing a GREAT job!

Living his whole life with a selfless, grateful attitude and positive outlook brought joy to all he encountered!  He truly had a gift and if we can find any tool from his “arsenal of warm and fuzzy feel good” to incorporate into our own lives, then his spirit will live on, in those he leaves behind!

To order memorial trees or send flowers to the family in memory of Phillip Scherer, please visit our flower store.