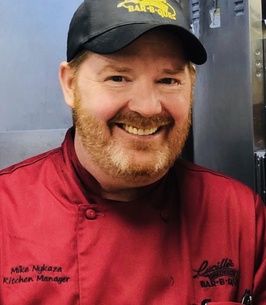 Michael Nykaza passed away on July 20th after battling the COVID-19 disease. Mike was the youngest son of Erwin (Archie) and Joanne Nykaza née Riggio. He was born in Illinois, and after growing up in the Chicagoland area, he graduated from Hoffman Estates High School in 1988 and attended Washburn Culinary School in Chicago. He moved to Salt Lake City to work in the kitchen of the Salt Lake Marriott. It was at the Marriott he met the love of his life Robyn, whom he married in May of 1997. While living in Utah the couple had their first child, Jacob Michael.

He left Salt Lake to become a sous chef and manager at Marriott Mountain Shadows Resort in Scottsdale. He had his second son Grayson Daniel while living in Arizona, before the job took him back to Chicago.

He continued to work with the Marriott before he began opening restaurants for Sweet Baby Ray's BBQ. His last two children, Blakelynn Kate and Barrett Linton, came while in Chicago in 2002 and 2004. After eight years at Sweet Baby Rays, he left to become the Kitchen Manager at Lucille's Smokehouse in Tempe, Arizona. He remained there until his passing.

Mike was an avid Chicago sports fan who would say if he could relive any moment, it would be the Chicago Cubs 2016 World Series. He was baptized a member of the Church of Jesus Christ of Latter-Day Saints in December of 2013. He was a family man who enjoyed every moment he spent with his wife, children and dogs. He was an amazing chef and was too humble to ever notice how admired he truly was. He was most proud, however, of being the father of his four children.

He is survived by his wife Robyn; his children Jacob, Grayson, Blakelynn and Barrett; his mother Joanne; his brother Mark; his longtime best friend Chris Edwards; and numerous nieces, nephews and cousins who adored him.

He was preceded in death by his father Archie, and his older brothers Robert and Daniel. There will be a small celebration of life at Lords Park (100 Oakwood Blvd. Elgin, Illinois 60120) from 5-8 on Tuesday, August 4th, as he makes his final trip home to Chicago. Please come wearing your Chicago sportswear.
To order memorial trees or send flowers to the family in memory of Michael Nykaza, please visit our flower store.