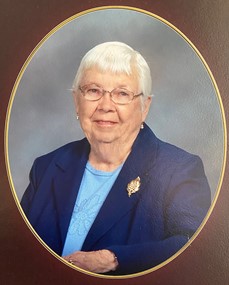 Sun City, Az,-Maxine Enabnit, 94,  peacefully passed away on Good Friday, April 2, 2021. She was born on February 13, 1927 to Walter and Aida Kelley, in Manchester, Iowa. Maxine graduated after 12 years in Manchester schools.  She married Darwin Enabnit, December 29th, 1949. They farmed the land that is still in the family today.  After retiring from farming and Collins Radio, Maxine and Darwin spent winters in  Mesa, Arizona until Darwin passed away suddenly in 1982.  Maxine decided to stay in Mesa and she lived there until she moved to Sun City, Arizona to be closer to her daughter Linda.

Maxine loved to dance, play cards, crochet, do craft projects, play bingo and just socialize.  She always had a smile on her face and loved to joke around.  She was also a lifetime member of the American Legion Auxiliary in Ryan.

In addition to her parents, Aida and Walter Kelley, Maxine was preceded in death by her older baby sister Elizabeth Kelley; her younger sister, Donna Millam; her husband, Darwin Enabnit; and her grandson, Shane Patrick Cauley,

A meet and greet will be held on Wednesday, June 9th, starting at 9:00 AM at St Patrick’s Catholic Church in Ryan, Iowa and the funeral will begin at 10:00 AM the same day.  Intermittent will follow at the Calvary cemetery in Ryan.

To order memorial trees or send flowers to the family in memory of Maxine Enabnit, please visit our flower store.