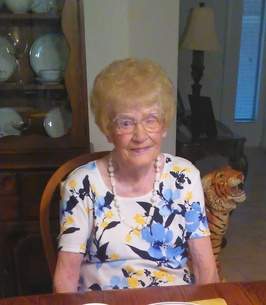 Mrs. Louise McCage died on Wednesday October 10th, . She was
92 Years Old. She was residing at Lifestream Assisted Living in
Youngtown at the time of her passing.
Mrs. McCage was born in Yakima, Washington on June the 23rd
1927. She is survived by her only child Douglas Rhyner and his wife
Carol, her two granddaughters Kimberleigh and Jennifer Rhyner,
And her two great grandchildren Alexa Rhyner and Jordan Huynh.
She was Married To Mr. Billy McCage for 42 Years, until his passing
In 2010.
She was a soul winner of the first order. She led people to the
Lord until shortly before her passing. She finished her high
School GED in her late fourties. She subsequently worked for the
State of Washington for several years.
She will be buried at Resthaven Park Cemetary in Glendale, AZ
On October the 16th, 2018. There will be a graveside service
Commencing at 2:00 P.M. on that date.

To order memorial trees or send flowers to the family in memory of Louise McCage, please visit our flower store.