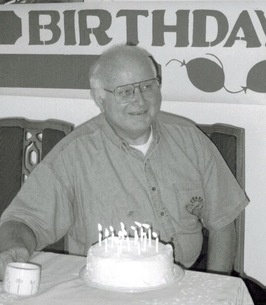 LaVane ‘Demps' Dempsey passed away at the age of 89 at his home in Peoria, AZ after a short illness. He and wife Loree enjoyed their winters in Arizona while living the remainder of the year in Maplewood, MN.

LaVane was born in Graceville, MN to John Thomas and Julia Dempsey, the youngest of 8 children. He grew up in Sisseton, SD and attended Huron College until drafted into the service. He served in both the National Guard and the US Marine Corps. Upon discharge, he moved to Minneapolis, MN driving a city bus for a couple years before he enrolled at the South Dakota School of Mines in Rapid City, SD. Upon graduation as a Civil Engineer in 1959, he began a career with the US Army Corps of Engineers in St. Paul, MN as a Geotechnical Engineer and completed his Master's degree in soils design at Purdue University in 1966. After many years of levee and earth dam design work, flood fighting and participation in development of computer programs for soils design he retired from the Army Corps after completing a combined 33 years of Federal Service.

He enjoyed watching his grandkids grow up, taking them fishing and instilling his theories on life. He was an avid fan of the Minnesota State Fair, wanting to check out all the new autos and wander around Machinery Hill. He liked to futz around the yard, tackling home and auto repair projects. He would creatively design solutions for people's household fix-it needs. He was a problem solver and enjoyed helping others. He loved to travel, driving thousands of miles across the U.S. while the children were growing up, tent trailer in tow. The family visited every dam he helped engineer, and every historical site along the route. With Loree, he spent many summers visiting places in Europe, Israel, and other parts of the world. He enjoyed fishing, the Arizona computer classes and playing bridge.

LaVane did everything to get well, but in the end he had to say ‘I have fought the good fight, I have finished the race, I have kept the faith.' 2 Timothy 4:7

He will be deeply missed. Those we love don't go away, they walk beside us every day.

The funeral sevice was held on Friday August 7th, 2020 at 11:00 AM. Fort Snelling National Cemetery; 7601 34th Ave South, MPLS MN.
To order memorial trees or send flowers to the family in memory of LaVane Dempsey, please visit our flower store.