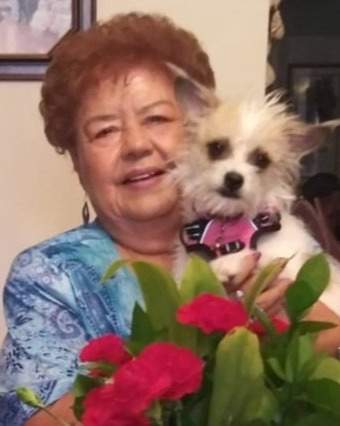 Josefina Z. Callahan (also affectionately known as ‘Chepina’), 79, of Sun City, AZ passed away peacefully with family by her side on August 11, 2022. She was born in Chihuahua, Chihuahua Mexico where she ran a small business with her mom and dad and attended vocational school before meeting and eventually marrying her late husband of 30 years, Richard R Callahan, who was working in Mexico at the time to support the opening of a new Ford plant.

After years of writing each other to stay in touch long distance, Josie and Richard would eventually marry and move to Richard’s work location just outside of Chicago, IL where they would live and raise three boys in Northwest Indiana, near Richard’s brothers and sisters, until his retirement in 1999.

Throughout the years Josie and Richard would enjoy traveling around the U.S. and Mexico with their kids, and later with alternate family and friends. Ultimately, they fell in love with Arizona, where they would move upon retirement and their sons would eventually follow.  Josie moved to Sun City upon Richard’s passing in 2000, where she would find comfort and support of the close-knit community over the next 22 years without her beloved by her side.

Josie had many hobbies, talents, and a personal flair noticed by all lucky enough to have met her. She loved the people in her life and always stayed in-touch with those who meant the most to her, even when spread across thousands of miles and without the modern benefits of cell phones or email. She loved colorful flowers, tasty food, good manners, music for singing and dancing, hot peppers, television mysteries, and the color purple.  She was kind and honest and you always knew where you stood with her. She loved her many pets throughout the years and enjoyed spending time with her good friends and her two sons and their families.

Those left behind to cherish her beloved memory are her sons, Michael E Callahan and his wife Melissa of Surprise, AZ; Patrick A Callahan and his wife Sunny of Peoria, AZ; and R. Callahan; along with her grandchildren: Kera, Liam, and Garrett; her brother-in-law, Eugene Callahan of St. John, IN, and his wife Dorothy;  and many other nieces, nephews, and cousins throughout the U.S. and Mexico, as well as a host of friends in Indiana and locally in Arizona.

A Catholic mass will be held at Saint Clements Catholic Church in Sun City AZ on August 25th at 10am, followed by remembrance at her nearby home on the same day. A celebration of Josie’s Life will also be held in October for family and friends who are currently unable to attend. For details contact Michael Callahan at mcallahan64@msn.com.

The family extends sincere gratitude to everyone who has taken time to pray for Josie and her family through this challenging time.

To order memorial trees or send flowers to the family in memory of Josefina Z. Callahan, please visit our flower store.