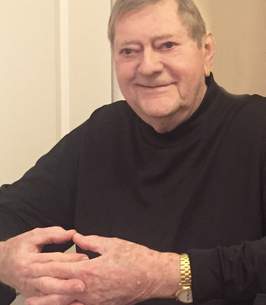 Herbert Carl Renken
Herbert C. Renken, 89, of Chandler, Arizona passed away on Friday, October 12, 2018, at Gardens at Ocotillo in the presence of family and loved ones.
"Herb" was born August 14, 1929, in LeMars Iowa, Plymouth County, the son of Carl Harm and Marie Meta Renken. Throughout his life, he was a warm and dedicated family man. No matter his role, whether a son, husband, father, brother, grandpa or friend, he brought care into every relationship. He married Elnora Lorraine Lubben August 7, 1949. Over the years, Herb honored and cherished their sacred vows, and cared for Elnora through to the very end.
They moved to California in 1956 and raised their four daughters in Anaheim, California. Herb poured unconditional love into his family, and like a harvest on an Iowa farm, that care yielded love tenfold. Together with Elnora and their daughters, they were active and giving to their community. They were members of Grace Lutheran Church until they retired to Glendale Arizona in 1992.
To know Herb was to know an altruistic and unconditional love. His strength was in his compassion; he chose to see the good in the world, and every stranger he met. When faced with a decision, he always chose kindness. That is the man that Herb was, and that is the legacy that lives on through his kids and grandkids. He is survived by and will be remembered fondly by his wife of 69 years, Elnora Renken, daughters and sons-in-law, Lynn and Bruce Urban, Cynthia and Richard Carriker, Connie and Robert Donohue and Teri and Greg Burdick. Grandchildren (12), Matt Beehler and Jodi Teller, Chris and Jayne Beehler, Kristen Carriker and Adam Croce, Brenden Carriker and Nathan Sinclair, Caitlin Carriker, Kelly Donohue, Bobby Donohue, Sean and Emma Donohue, Kevin Donohue and Sheridan Taylor, Renae and Jason Conner, Scott Burdick and Clay Gillian and Kyle Burdick. Great grandchildren (7) Emily Beehler, Tyler Beehler, Riley Croce, Easton Carriker, Taylor Gentry, Conor Gentry, Brady Conner. Brother, Vern and Fran Renken, sister Ramona and Bob Lang, sister-in-law Barbara Renken and numerous nieces and nephews. He was and continues to be a profound gift to his family.
He is preceded in death by his parents Carl and Marie Renken, two brothers Kenneth and Gene Renken and sister-in-law Rosemary Renken.
Services and burial will be on October 19, 2018 at 1:30pm. Arrowhead Memorial Gardens: 7545 W. Rose Garden Lane, Glendale, AZ 85308.
To order memorial trees or send flowers to the family in memory of Herbert Renken, please visit our flower store.