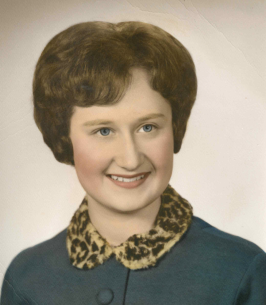 It is with deep sorrow the family of Helen Rosalie (Cary) Sprague, 74, of Sun City, Arizona announce her passing on Friday, January 17, 2020 at her home.

Helen was born January 28, 1945 in Council Bluffs, Iowa to Maurice Carl Cary and Elizabeth Ann (DeKay) Cary . The family spent Helen's first years in Avoca, Iowa. They later moved to the family farm in Griswold, Iowa where Helen spent the remainder of her childhood. Some of her favorite stories involve good times spent with close family and friends on their nearby farms, church, or one room schoolhouse. After graduating high school in 1963, Helen went to secretarial school and moved to Omaha, Nebraska. There she met James Sprague, whom she married on February 13, 1965. They moved to Syracuse, New York where they had 2 children; Karen (Sprague) Brewer of Surprise, Arizona, and Kevin Sprague of Mesa, Arizona. The family moved to Phoenix, Arizona in 1973 where they stayed for 25 years. After her husband Jim passed away in 1998 Helen moved to Black Canyon City, Arizona where she lived several years. She later moved back to the Valley to spend her final years in Sun City, Arizona.

Helen wore many hats in her lifetime. She was a secretary before the kids were born, worked as a homemaker, then returned to secretarial work. She also volunteered at the local elementary school. An avid animal lover, Helen became a certified Veterinary Assistant and was employed at a local animal hospital. She later worked at a horse stable, enabling her to spend time with the animals she enjoyed so much. She loved to go on trail rides with her horse, Ellie! Helen also kept busy providing daycare for family and friends plus working part-time at a Valley childcare center. After moving to Black Canyon City Helen was active at the stable, hiking, doing yoga, Bunco, traveling with her friend Mark, participating in the reading club, and visiting with her wide circle of friends. Helen also enjoyed being involved with the Black Canyon City clowning group, often entertaining at local parades as "Rosa" along with her little dog, Beanie.

To order memorial trees or send flowers to the family in memory of Helen Sprague, please visit our flower store.