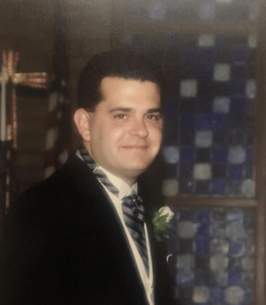 Frederick Gruber, 50, of Elmont, NY, died and went to be with the Lord on October 6, 2018, from complications of congestive heart failure. He was born February 7, 1968 in Mineola, New York to Frederick Gruber and Karen (Gruber) French.

He moved to Mesa, AZ in 1984 after the tragic loss of his father but never forgot his New York roots. He continued his education after high school at Apollo College, graduating with an associates of science degree in respiratory therapy. Fred's strong passion for helping others and kind nature made him a success in his chosen field. All that knew him could appreciate his commitment to his field. He was proud of his work as a flight medic and the lives he was able to impact through his work. He worked for Banner Health for over 20 years as a respiratory therapist and more recently as a manager.

Fred managed to pack a lot of life in his 50 short years. Prior to his illness, he loved going flying and fishing as it reminded him of the precious time he had with his father when he was a young boy. He loved sports, especially football, and played fantasy football every season. His favorite teams were the New York Jets and the New York Mets. J-E-T-S...Jets, Jets, Jets! The soundtrack of his life was decidedly 1980's with some Billy Joel and Enya thrown in for good measure. He had a carefully crafted haircut and was a sharp dresser. He maintained his impeccable style until the end. He loved science fiction movies and the WWE. He liked to travel when he could and was able to go on many adventures during his life. He was an active storm watcher in Phoenix and eagerly anticipated the Arizona monsoon season every year. He faithfully kept those around him informed about the weather on any given day. We will miss these reports but are comforted to know that he's chasing storms in Heaven now. He had a sharp wit that we all enjoyed and he loved to laugh as often as possible. He savored certain foods especially when it was made by his mom, Karen, or his mother-in-law Anne Clark. In recent years, he was most proud of his commitment to his young son, Kyan, and spent every moment he could with him making memories.

The magnitude of Fred's huge heart could be seen in the sacrifices he made for those he loved whether it was caring for them while they were sick or making sure they had necessary resources. He never let his health issues get in the way of being the best father, son, brother, or friend that he could be even if it cost him somehow. You could count on him to always be there when you needed him most. "Greater love has no one than this, that someone lay down his life for his friends"-John 15:13. Frederick's constant love, support and caring enriched all that knew him. We will never forget his compassion, patience, wit, thoughtfulness, and work ethic. He will stay in our hearts forever and we will pull the "invisible string" that reaches all the way to Heaven.
Frederick was preceded in death by his father Fredrick Gruber, paternal grandmother Carmen Gruber, his maternal grandmother Katherine Smith, and his maternal grandfather Patrick Smith.

He is survived by his mother, Karen French and stepfather Bernie French, sister Patricia Gruber and niece Abigail Gruber, brother Michael Gruber and niece Samantha Gruber, and his children, Rachel, Tanner, Alecia, Andrea and Kyan, and many grandchildren, aunts, uncles, cousins, in-law's, extended family and friends. All of whom he loved and touched deeply during his life.

Services will be held 11am on November 2, 2018 at Regency Mortuary. Pastor Todd Chambers will officiate. The family will have a private gathering afterwards to celebrate Fred's life and his favorite foods.

The Lord Is My Shepherd (A Psalm of David.)

23 The Lord is my shepherd; I shall not want.
2 He makes me lie down in green pastures.
He leads me beside still waters.[a]
3 He restores my soul.
He leads me in paths of righteousness[b]
for his name's sake.

4 Even though I walk through the valley of the shadow of death,[c]
I will fear no evil,
for you are with me;
your rod and your staff,
they comfort me.

5 You prepare a table before me
in the presence of my enemies;
you anoint my head with oil;
my cup overflows.
6 Surely[d] goodness and mercy[e] shall follow me
all the days of my life,
and I shall dwell[f] in the house of the Lord
forever.[g]
To order memorial trees or send flowers to the family in memory of Frederick Gruber, please visit our flower store.