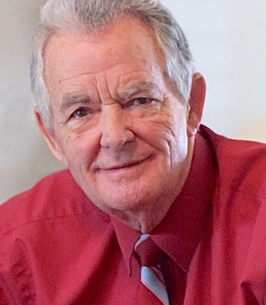 Donald Lindsey Smith, age 88, passed away March 5, 2020, after declining from Alzheimer's disease and from complications following a stroke. (In lieu of flowers, the family suggests donations to the Alzheimer's Association at alz.org.) He was a devoted husband, father of 4, grandfather of 19, and great-grandfather of 17. He was a lifelong member of The Church of Jesus Christ of Latter-day Saints. He spent his professional career as a Special Agent for the Federal Bureau of Investigation.

Don was born February 9, 1932, in Auburndale, Florida, the only child of James Lindsey Smith and Lillie Mae Thompson Smith. His parents, married in 1928, moved to that area to work in the citrus groves-she in a packing house and he as a field foreman.

Don graduated from Auburndale High School in 1950 and then attended Lakeland Business College. While a student there, he was recruited by the Atlantic Coastline Railroad to work as an administrative assistant to the railroad car foreman.

In 1952, during the Korean War, Don was drafted into military service and trained as an infantry soldier in the U.S. Army at Fort Jackson, South Carolina. The war ended before his unit was sent overseas, and he received an honorable discharge.

In 1954, Don was called by the Church to serve as a missionary in the Southern States Mission (South Carolina, Georgia, and Alabama). He began proselyting in Gainesville, Georgia, and later served as the supervising elder in the North Alabama District until his release. He remained a lifelong witness of the Book of Mormon and the Prophet Joseph Smith.

Don began his college education at the University of Utah. While there, he was called to serve as a guide on Temple Square in Salt Lake City by Elder Marion D. Hanks, who oversaw the Southern States Mission.

Don left Utah for Durham, North Carolina, when his father was hospitalized at Duke University Medical Center for cancer surgery. Don enrolled at Oglethorpe University in Chamblee, Georgia, and later received his Bachelor of Laws degree from John Marshall Law School in Atlanta, Georgia, in 1959.

While in Atlanta, Don became reacquainted with Vera Elizabeth Owens Moore, who was recently widowed with two small children, Melody and David. Don and Vera married on September 1, 1959, in Columbus, Georgia (Vera's hometown), and he later adopted the children. Don worked as the security patrol for the FBI in Atlanta, where the couple's next child, Susan, was born in 1960.

Don was later accepted as a Special Agent for training at the FBI Academy at Quantico, Virginia. His first assignment as an FBI agent was Oklahoma City, Oklahoma, where the last child, Bonnie, was born in 1962. Don was then assigned to Louisville, Kentucky, and the family resided first in Jeffersonville, Indiana, and then Elizabethtown, Kentucky. There, he received commissions as both a Kentucky Colonel and as an Honorary Colonel in the Kentucky State Police.

Next, while serving in Las Vegas, Nevada, Don was promoted to an Assistant Special Agent-in-Charge in the field office. In 1975 he was transferred to FBI headquarters in Washington, D.C. There, he headed the newly created Freedom of Information section, which processed requests for declassified information. He retired in 1982 after 25 years and then worked for the Pentagon Federal Credit Union, where he established a security system and supervised its operation.

Don and Vera moved to Phoenix, Arizona, in 1985, where he performed investigative work for several companies, including background checks for the U.S. Air Force. He also served on the Deer Valley Planning and Zoning Commission and the auditing supervisory committee of Credit Union West. In retirement, Don fulfilled a longtime dream of owning and racing thoroughbred horses.

Don wrote and published a book in 2007 titled Not Released Unharmed: Kidnap Victims. Much of the information in this compilation of FBI investigations became available under the Freedom of Information Act. Don always enjoyed reading history, especially about World War II. He collected classic Hollywood movies, which he loved to share with family and friends. He was a gifted storyteller who delighted listeners with recollections of his rural childhood and exciting FBI adventures.

In lieu of flowers, the family suggests contributions to the Alzheimer's Association at alz.org.

To order memorial trees or send flowers to the family in memory of Donald Smith, please visit our flower store.