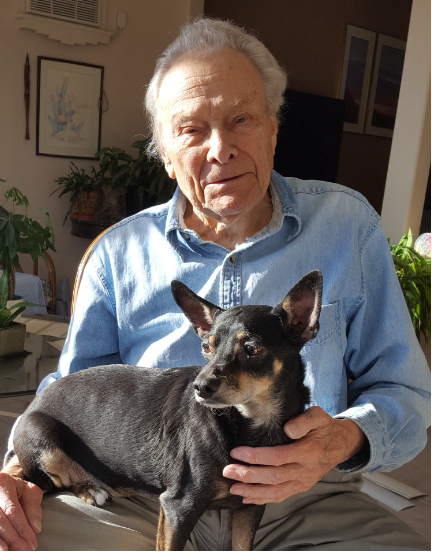 Denny McCormick Roholt, age 95, of Sun City, AZ passed away peacefully with grace and dignity on April 10, 2021 surrounded by the love of family and the presence of the Lord.

Denny was a man of varied talents with a keen sense of humor along with a knack for telling stories and jokes, making people smile, and always welcoming folks in. He graduated from Roosevelt HS in Minneapolis, MN in 1944 and served as a Navy medical corpsman during WWII and the Korean Conflict in both the US and Philippines. His interest in all things medical and scientific started in his teens and continued throughout his life. His service in the Navy left a lasting impact on him. He was able to go on an Honor Flight, which meant so much to him. He was filled with pride at the accomplishments of family members who pursued Military careers. He was a pilot who loved to slip the surly bonds of earth.

After a career in sales, chemistry, engineering, and production management in Minneapolis, MN and Superior, WI, Denny retired in 1989 from Amsoil, Inc. as Director of Research and Development. While living in Superior, Denny owned the Tiger’s Den and Marine Bar & Grill in Allouez. Denny and Florence moved to Sun City, AZ in the fall of 1994 with his wife, Florence. Leaving winter behind was a dream come true. He enjoyed taking part in the metal and woodworking clubs at the recreation centers. He was a skilled carpenter, building a house in the country outside Superior, WI and an addition to the house in Sun City, along with many remodeling projects along the way. Denny and Florence made many wonderful friends in Arizona and wherever they lived or traveled. Denny always had a helping hand to lend to someone in need and they have had the best neighbors in the world.

Among his greatest accomplishments was the celebration of 70 years of marriage on September 22, 2020. Denny and Florence met when they were 13. Both agree that their love was “just meant to be”.

Service and duty were at the core of who Denny was a person. He was a 32º Mason, a member of the Scottish Rite, a Shriner at Zuhrah & Aad Temples (Potentate’s Aide & Superior Shrine Club), a P.E.R. of Elks Lodge 403 in Superior, WI. He was a lifelong member of the American Legion, V.F.W., the Korean War Vets, and Sons of Norway. During his lifetime he was honored by many of the organizations to which he belonged or did service work for. In 2018, Sun City Masonic Lodge #72 recognized him for 65 years of service as a Mason.

A military commitment ceremony will take place at Fort Snelling in Minneapolis, Minnesota at a later date. Memorials to Shriner's Hospital for Children.

To order memorial trees or send flowers to the family in memory of Denny Roholt, please visit our flower store.