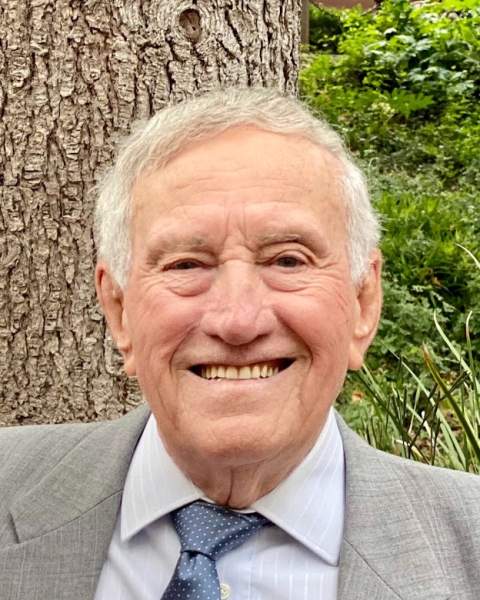 Hand delivered by a local florist

Charles Frederick Harrison, of Sun City, Arizona, passed away peacefully at home on September 4, 2022, at the age of 88.Chuck was born in Battle Creek, Iowa, on September 30, 1933, to James and Bernice (Baumann) Harrison. He was the second oldest son behind Darrell. Chuck had two younger brothers Duane and Myrl.

Chuck grew up on his family's farm. He went to school in Battle Creek, a farming community of about 800 people. In such a small town it wasn’t very long before young Chuck made the acquaintance of a girl who lived on a farm on the other side of town. Her name was Geneva Morrice and the two started dating in their teens.

Chuck graduated from Battle Creek High School in 1951. In his first year after graduation, he split his time between working on his family's farm and for a local contractor.

Chuck enlisted in the United States Army in 1952. He was stationed at Fort Lewis in Washington state, and it was during his time in the Army that Chuck developed a lifelong love for the Pacific Northwest. It was also during this time that he and Geneva became engaged.

Upon his discharge, Chuck and Geneva married on May 6, 1956, in Ida Grove, Iowa. They settled in nearby Sioux City, where the first three of their four sons were born. Chuck was employed as a payroll timekeeper for the Sioux City stockyards, and he attended night classes at Morningside College.

In 1963, the family moved to Glendora, California. In their first few months there, Chuck delivered milk for the Carnation Milk Company. His next job was installing acoustic ceiling tile. After that he bought a masonry contracting business. And in 1967, Chuck switched careers and joined the United States Postal Service. He served in Glendora as a letter carrier for approximately ten years. From there he was moved into the post office as a supervisor, and later as a postmaster. He served as postmaster in several offices in and around Glendora, retiring in 1992 as the Pomona postmaster.

Although the demands of family and career kept Chuck busy, he found time to coach in the Charter Oak Youth Baseball program from 1967 to 1981. During this time not only did he coach all four of his sons, but he also coached hundreds of other boys in the community, many of whom later talked about how his coaching had a profound influence on their lives.

Chuck and Geneva moved to Sun City, Arizona, in 1993. While living there he became an avid golfer with the Hackers Golf Group.  He and Geneva were active in their church and spent the summer months in Oregon, Utah, the Midwest, California, and parts in between. They also enjoyed traveling abroad to Europe, Japan, and Mexico.

The essence of Chuck's life cannot be summed up in one obituary. In addition to golf, church life, and travel, he relished going out for breakfast every morning and amusing the wait staff with his corny jokes. Chuck also enjoyed working jigsaw puzzles and reading Westerns. But mostly, he was a family man who loved his wife and sons, then later adored his grandchildren and great-grandchildren. To the end of his life Chucks fondest wish was that he and Geneva would spend their time with those they loved.

Chuck was preceded in death by his parents, and his brothers Darrell and Duane. In addition to Geneva, Chuck is survived by his sons Brian (Candace) of Cave Creek, Arizona, Brad (Sue) of Tucson, Arizona, Boyd (Karen) of West Jordan, Utah, and Barry (Wendy) of Phoenix, Arizona, as well as 13 grandchildren and their spouses, 11 great-grandchildren, his brother Myrl (Priscilla) of Sun City West, Arizona, and numerous nephews and nieces.

Geneva and her family would like to thank Hospice of the Valley for providing Chuck excellent care in his final months. They would also like to thank their pastor Dr. Brian Anderson as well as their church family at The Congregational Church of Sun City for their loving support during the difficult time of Chuck's illness.

In lieu of flowers, the family suggests a memorial to Chuck at either The Congregational Church of Sun City or Hospice of the Valley.

To order memorial trees or send flowers to the family in memory of Charles Frederick Harrison, please visit our flower store.