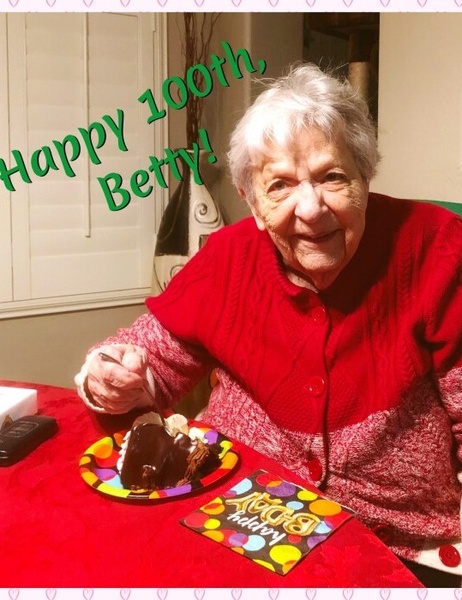 On August 23, 2020, at 7:12 am Betty Louise Taylor, age 100, of Litchfield Park, Arizona, left this world surrounded by her daughter and son in law. Betty was born on December 18, 1919, at Red Lion Pennsylvania, the youngest of 8 surviving children of Lottie and Aquilla Meads. She called Red Lion home until 2008 when she moved to Arizona to live with her daughter and son in law.

She graduated from Red Lion Area Senior High School in 1937 where she had the unique distinction of being the only member of her class to never have missed a day of school in 12 years. Upon graduation she attended West Chester State College and was a graduate of Thompson business school.

In 1942, Betty met and married Karl (Stu) Klinedinst. They loved to dance, listen to big band music, play cards and watch baseball. In 1943, they welcomed the birth of a son James Karl Klinedinst and a daughter, Kathy Louise in 1949.

Betty was a devoted wife and mother who worked both inside and outside the home. While she held numerous jobs during her life time, the longest was being a bank teller for First National Bank of Red Lion. Betty loved watching her children grow up and spending time as a family. Some of her happiest memories were the yearly vacations spent at the Jersey Shore in Ocean City.

Even though Stu and Jim died in 1977 and 1981 respectively , Betty found strength to go on to live a happy life by putting her life in Gods’ hands. She let God plot the course of her life which served her well. Up until her death she was the oldest living member of St Paul’s United Methodist Church have joined in 1929.

Upon retirement she did volunteer work for the Kaltreider Library and the York County Chapter of AARP. She also enjoyed her grandchildren Emily, Ross and Kent. She loved to swim and play tennis, travel, dine out, play board games and cards and read.

Betty is survived by her daughter Kathy Albin and her son in law Mike; grandchildren, Emily Klinedinst; Ross Millward, and Kent Millward, his wife Melissa and her Great Grandson Sebastian. She also had numerous nieces and nephews she was close to.

She was proceeded in death by her husband, son, mother and father and 8 brothers and sisters.

Betty’s remains will be returned to Red Lion for a graveyard service later this year. In lieu of flowers contributions can be made to the American Cancer Society or the St Paul’s United Methodist Church in Red Lion.

To order memorial trees or send flowers to the family in memory of Betty Taylor, please visit our flower store.