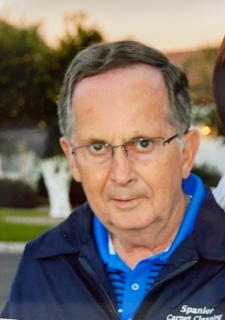 Denis Joseph Spanier, 79 of Mesa, AZ, formerly of St Martin, MN, passed away on September 1, 2021 at his home with his loving family at his side.

He was born on April 26, 1942 in St Cloud, MN and grew up near Roscoe, MN and later moved to St Martin, MN with his parents, Leo and Marie Spanier, his sisters, Ruby Anderson (Bemidji, MN), Ann Schramel (Richmond, MN), Lin Spanier (Oakland, CA) and his two brothers, Chris Spanier (Paynesville, MN) and Leon Spanier (Santa Rosa, CA). The Spanier family was well entrenched in the farming and Catholic community. He graduated from Paynesville High School in 1960.

Denis enlisted in the Army Reserves and served his country from August 1960 through March 1968. He went on to become a bricklayer in Minneapolis and in 1971 he moved to St Martin, MN to start his own business, Spanier Masonry/Spanier Construction. In 1987 Denis moved to Mesa, AZ and started another business, Spanier Carpet Cleaning. He remained in that business till he retired and passed the business on to his son.

Denis met his loving wife, Kathleen “Kathy” (Wensmann) at a dance hall in Richmond, MN and they were married in 1969 in the New Munich Catholic Church, New Munich, MN. Denis and Kathy started their family of three children, Sean, Beth, and Amber in St. Martin, MN. Denis was involved in the community through the Lions Club and the American Legion.

Denis is survived by his wife of 52 years, Kathleen “Kathy” (Wensmann) Spanier, son Sean (Markita) Spanier of Chandler, AZ, daughters Beth (Sven) Gronemann of Ventura, CA, and Amber (Travis) Pietz of Gilbert, AZ and his six precious grandchildren; Joseph, Jacob and Sloan Spanier and Hayden, Logan, and Brooklyn Pietz. Denis was preceded in death by his parents, Leo and Marie Spanier of St. Martin, MN. Denis was always very proud of his family. He loved watching his grandchildren’s football and baseball games, dance recitals and cheer competitions. If there was a game, grandpa and grandma made every effort to be there watching and cheering loudly.

Funeral services will be held at Christ the King Catholic Church, Mesa, AZ. The date of the service is set for November 19, 2021 at 11:00 am. Confirmation of the service can be found at www.RegencyMortuary.com. Burial will follow at Queen of Heaven Catholic Cemetery, Mesa, AZ.

In lieu of flowers, memorial donations are appreciated to the National Parkinson’s Foundation.

To order memorial trees or send flowers to the family in memory of Denis Spanier, please visit our flower store.